In another attribute you wanted to restrict its association to only Objects that belong to Concept “A”.

If a Reference Item was Resource Component, we could simply refer to the Item; unfortunately it is not.

An alternative approach would be to have the qtReferenceItem UI class have an option to assign a specific Property (type and value) to a Persistent Object when it is assigned to the Item and have that Property removed when unassigned.

Since the act of assigning/removing Properties changes the resource the Object belongs to, the class would use an Operation to set/unset the Property as shown below: 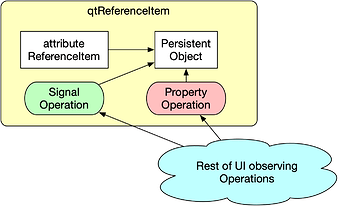 If the Persistent Object is itself an Attribute from the same Resource as the ReferenceItem, then the Property could be directly assigned (since the assumption that the Attribute Resource itself is safe to be modified. Instead of the Property Operation being called, a simple Signal Operation would be used to make sure the rest of the UI is up to date.

Setting the Property Mechanism would be done using an ItemView Configuration.

Trying to make this part of SMTK Core

The main issue here is the need to run an Operation. As of today the Attribute API is not operation-based and to have the implementation of ReferenceItem::SetValue(…) to schedule an Operation could have unforeseen consequences. Prior to doing this, it might be better in the long run to make Item a Resource Component and directly refer to the Item instead of using a Property.

My preference is to make Item subclass Component. However, even if Item was a Component, it sounds like we are talking about extending the Resource::queryOperation() grammar to accommodate this. I’m curious what that would look like and how efficient the query would be.

I am not as concerned about setting properties being an asynchronous Operation: