This is part 3 of 3 in the series on updating SMTK projects for multiple simulation sequences. Part 1 discussed UI updates to be implemented in the project plugin module. Part 2 described proposed changes to SMTK core for supporting the multiple-simulation use case, primarily via the addition of an smtk::project::Job class. Part 3 now discusses how the project and simulation plugins should be updated to support the underlying goal of carrying out loosely-coupled simulation sequences.

The main requirements are:

For now, the strawman design presumes the same target machine for all jobs.

In terms of what the UI should look like, I think the export dialog for projects should include an AnalysisView for the user to select which simulations to run. This screen shot is a preliminary mockup example for ACE3P projects. 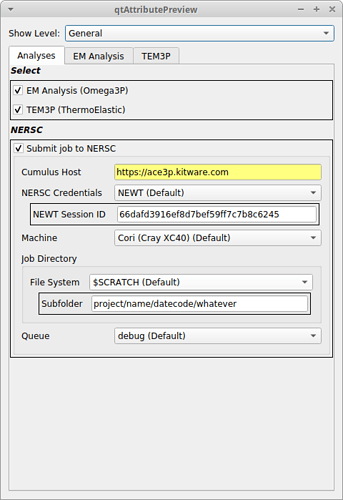 The other tabs are used to specify options for the individual simulations. The next screenshot is a strawman for one ACE3P simulation. 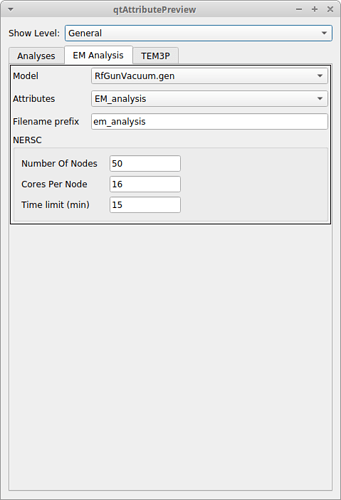 Not shown in either screenshot are “Submit” and “Cancel” buttons.

In terms of how to implement this UI and functionality:

When you add in the girder/cumulus server and NERSC/NEWT interactions, there are alot of moving parts where things can go wrong. Perhaps the first step in developing this is to come up with a detailed logging capability and/or other visibility and test features. It is also important the we come up with an intuitive file organization for projects, for forensic reasons if nothing else.