I have returned with more Tension Pneumothorax related inquiries.

I’ve been running a lot of tests to measure the behavior of the engine after triggering closed Tension Pneumothorax and I’ve noticed that there appear to be some discrepancies with how the simulation handles male vs female patients. In general, scenarios that use female initial state files do not tend to show patient condition degrade and recover as significantly as male initial state files. I’m consulting with physicians on this project and according to them gender should not have a significant effect on the impact of Pneumothorax.

For my tests I used the desktop explorer version 2.0.1. I conformed my experiments to the model outlined in Figure 2.4 and Table 14 of the respiratory methodology documentation (found here: https://pulse.kitware.com/_respiratory_methodology.html). I only ran tests on closed Tension Pneumothorax and therefore left out triggering the chest occlusive dressing action. Besides that, each action is called in the time interval laid out in the above referenced table and chart.

Below are the results when testing with the initial state files DefaultMale and DefaultMale. 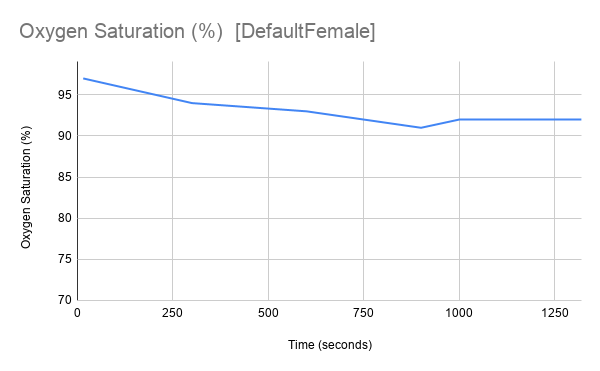 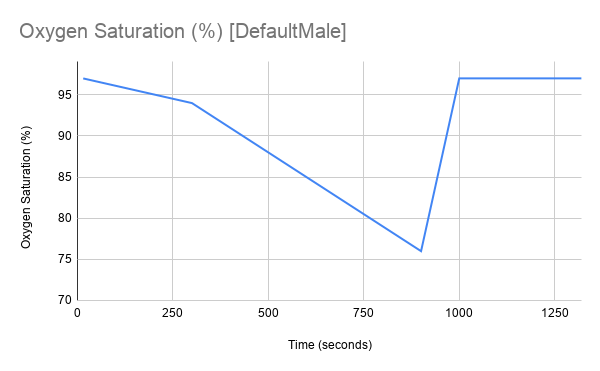 After noticing that a few different female initial state files did not lead to the predicted behavior we decided to run two trials using the included initial state file Gus; once as male and once as female. Below are the results. 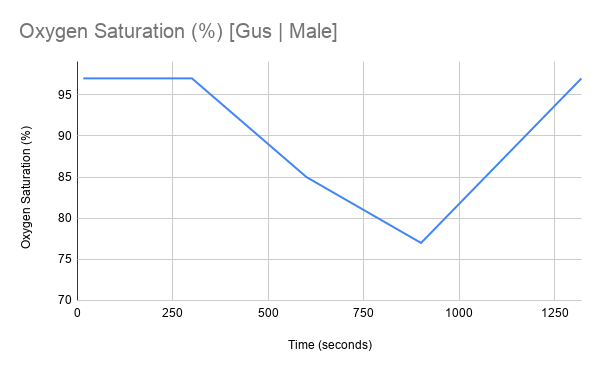 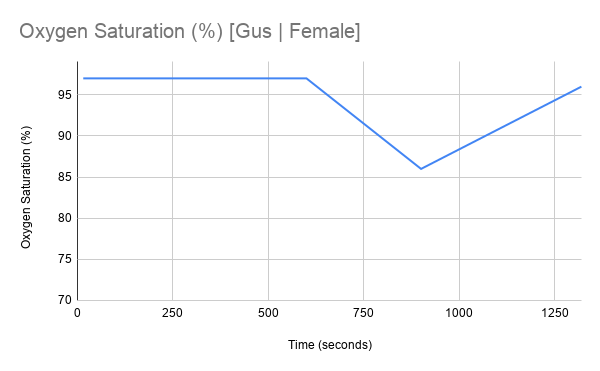 You can see that although the only thing that changed between these trials was Gus’s gender, lady Gus was not affected to nearly the same degree her male counterpart was. This is especially evident in the oxygen saturation results. These results strike me as significantly different when considering the initial state files used were nearly identical.

I’m wondering what is driving these discrepancies as it’s my understanding that gender should not impact the effect of Tension Pneumothorax on a patient.

Thanks in advance,
Mac

Great work digging into Pulse like this!
I might not answer your question,
but here is the data associated with a male and female Gus

We start out with only these values set in the patient files: 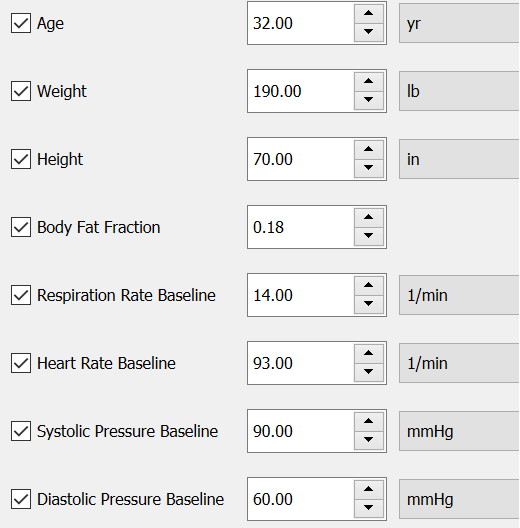 Once stabilized, you can check the show advanced properties checkbox on the patient tab to see what these values were computed to by our patient methodology.
Many of the parameters of this methodology are driven by sex.
Just by changing the Sex on Gus, we will compute patients with different lung capacity/volumes 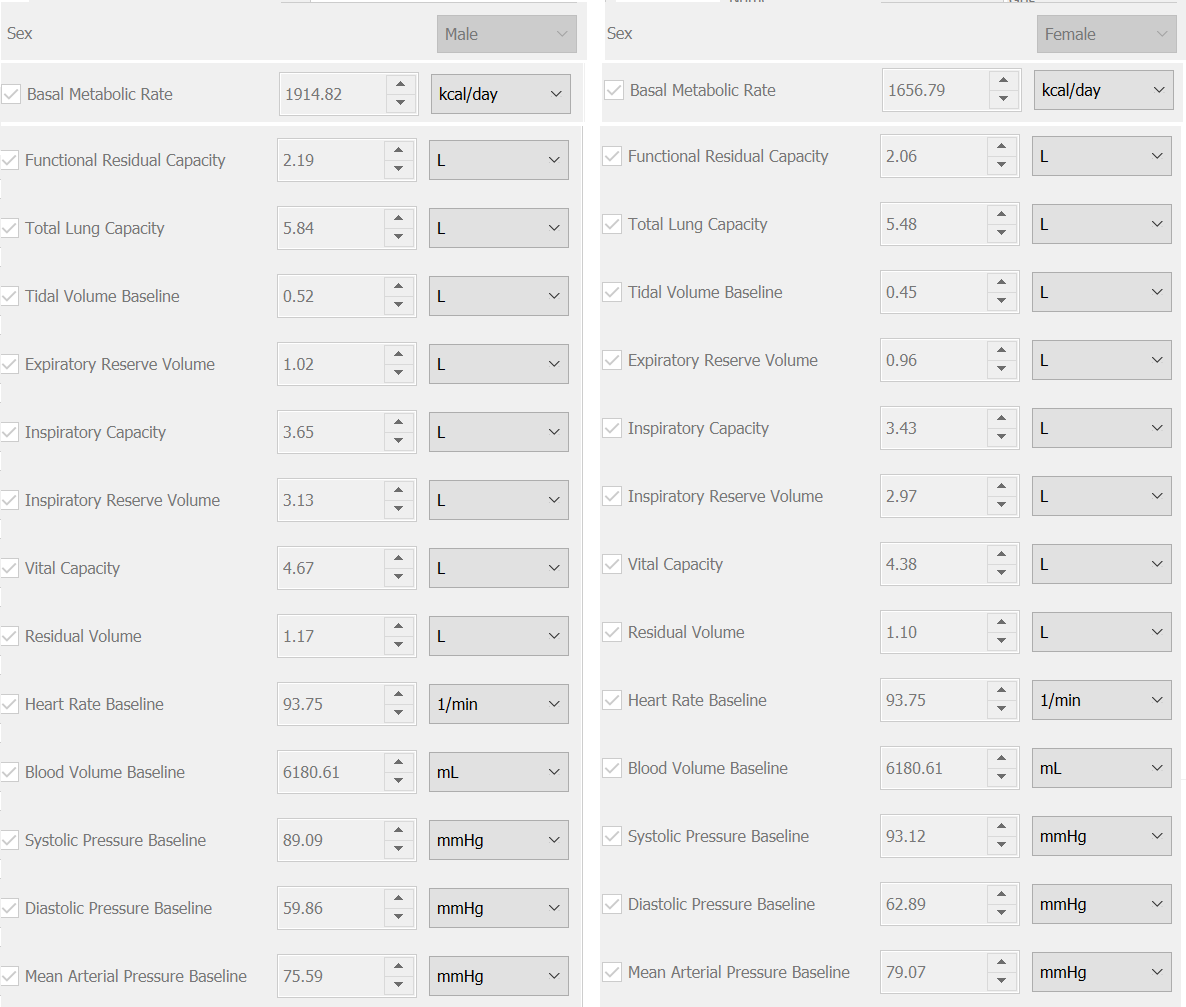 Sorry for the delayed response, @mac. That is some great analysis that we missed.

The problem/difference really boils down to this line of code: https://gitlab.kitware.com/physiology/engine/-/blob/master/src/cpp/cpm/physiology/Respiratory.cpp#L1428

Table 1 in the Patient methodology defines how different patient parameters are set based on sex. The lung volumes are assumed smaller for females (i.e., FRC, TV, etc.), which means the respiratory muscle driver pressures are lower and lung pressures are generally lower. Therefore, the same leak resistance is less effective for female vs. male patients.

I ran your scenario for both male and female default patient and you can see that the female patient’s pneumothorax-effected lung never fully collapses (signified by the volume flat-lining). 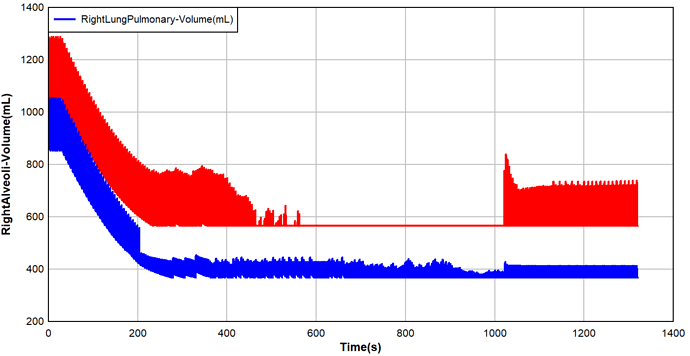 If I reduce that resistance on the aforementioned line of code (I set it to 20 cmH2O-s/L), the volume response is much closer and the SpO2 drops as expected. 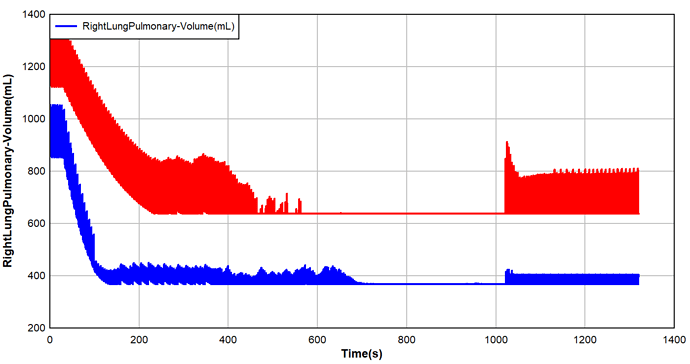 I’ll think through the best way to adjust this resistance based on patient parameters and let you know when the fix is pushed to the codebase.

I just realized that I typed a response expressing my gratitude towards your swift response and stellar insight when you first got back to me on this but never submitted it.

Hello! Just wanted to follow up on this and check if the solution has been pushed

This is still sitting on my to-do list, but I’ve been distracted. I’ll try to get it in later this week and let you know. Sorry for the delay.

I’ve begun trying to solve this pneumothorax modeling problem. There is a small update that should now cause a full lung collapse at maximum tension pneumothorax severities for all patients as I described earlier. I pushed the code into this new branch: https://gitlab.kitware.com/physiology/engine/-/tree/feature/pneumothorax_update.

I’m still not fully satisfied with the model and have some work to ensure appropriate cardiovascular effects and better recovery with needle decompression for patients beyond standard male. I will let you know when it’s ready to merge into 3.x.

Thank you for this! I’ll try to test out the new branch this week!