Managing the Resources of a Project

Knowing which resources of a project to load into memory and when.

Assume that a project requires a set of resources {R1, R2, R3}. In the new design, this can be modeled using the internal attribute resource owned by the Project. This alleviates the project from having a separate data store for holding onto the resources). When the project is loaded into memory, R1 and R2 should be loaded as well but R3 should not (perhaps R1 is the model, R2 is the analysis mesh that the user wishes to use, and R3 is a courser mesh that the user might use in the future). How do we capture this and what mechanism is to be used to perform the action?

1. Project does all the work

This approach requires each derived project to provide an operation to explicitly load the resources into memory. In this example, the designer would create a LoadOperation that would load in R1 and R2 (if they’re set) when the project loads.

2. Base Project provides an initial structure.

In this case, the base project class could provide a simple structure to its internal attribute resource. For example it could have an Attribute Definition called “LoadImmediately” and one called “LoadLater”. A derived project could then add a set of ResourceItems to either of these Definitions and the base project load operation would load all resources listed in the former but not those in the latter. In the above example, R1 and R2 would be captured by ResourceItems under the “LoadImmediately” Attribute and R3 would be a ResourceItem under the “LoadLater” Attribute.

3. Extend Resource Item and its Definition

In the case of the above example, the ReferenceItemDefinitions for R1 and R2 would have LoadRequirements = LoadImmediately and R3 would have its set to LoadOnDemand.

Let’s assume we have a project that has a set of resources, how can a Task in the Project’s workflow refer to these resources? Once again there are several options:

Projects and the Resource Manager

Lastly I wanted to bring up the issue of how Projects and their Resources work with respects to the Resource Manager. Lets assume we have the following:

Currently the Resource Manager holds a shared pointer to the resource when it is loaded which means without any modification to the code, resources loaded in via Projects would not get removed when the Project is removed.

Here are a couple options:

This would solve the above problem but at the cost of introducing a bigger problem. Namely Projects would need to provide the same search functionality the Resource Manager provides. 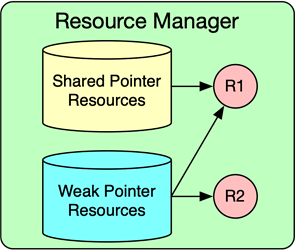 SplitResourceManager605×511 41 KB
This would also address the following modification of the above example:
4a. The user directly loads in R1

Its the Project Manager Job 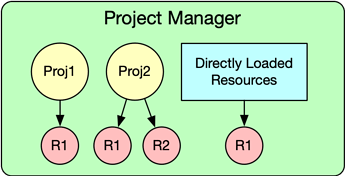 ProjectManager1824×422 39.9 KB
This is sort of the dual of the above approach. The Project Manager could keep track of all Projects in the system (which would be its main job). When a Project is being unloaded, the Project Manager would grab the Project’s list of loaded resources and remove those Resources that don’t exist in either another Project or has been directly added to the Resource Manager.
jacob.vaverka January 13, 2020, 9:59pm #2

I agree with your conclusion. It seems to me that extending Resource Item and its definition provides the most flexibility, and therefore offers the most potential for SMTK managing resources throughout the lifespan of a project.

Regarding item #1, I agree that adding this capability to ResourceItem is the way to go. Before moving on, I think we should also clarify, and possibly extend, what the term “load on demand” means. For example, when editing a project’s attribute resource, I presume we will be able to set a ResourceItem value to some project resource whether that resource is in memory or not. Similarly, the ResourceItem.value() should be able to return some kind of info/placeholder/descriptor for a resource not currently in memory. In other words, the process of loading an on-demand resource should always be initiated by the application, not SMTK.

Regarding item #2, I don’t have an opinion on the implementation, at least not yet. The one recommendation I have is to reframe the issue. The current wording considers how workflows can refer to project resources. In contrast, I think the reverse perspective is more applicable. In other words, each workflow should define the resources it uses with whatever mechanism TBD, and it will be the project’s job to provide storage and management of them. So I see 2 main parts to this issue:

Also, because this is a new project/workflow discussion, I am contractually obligated to reiterate my usual comment that we need to extend projects to support simulation assets that are not SMTK resources. This is a requisite feature.

In other words, the process of loading an on-demand resource should always be initiated by the application, not SMTK.

Well said, and an important distinction I think.

we need to extend projects to support simulation assets that are not SMTK resources.

Sorry to make you repeat yourself, but could you provide a brief example for clarity?

By SMTK resources I mean smtk::resource::Resource and its subclasses. This comprises the various model types that SMTK supports along with our mesh and attribute resource types. I presume that our first implementation will be limited to these data types, but there are other data generated and used during a simulation workflow/lifecycle that we will also need to support, most notably simulation input decks and output results. (There is also at least one more data type that I remember from a nuclear application.) So my comment is mostly to remind our guys that we need to generalize our notion of “resource” to include other data types that are not based on SMTK.

Thank you! I was hoping to hear this. As you pointed out, supporting these assets brings continuity to the simulation workflow/lifecycle (and Project).