SMTK’s descriptive phrase view provides a tree that shows resources and/or components in a hierarchy. The top-level entries are generally specified as a filter to select persistent objects from a resource manager. The children of these entries (and all sub-entries) are computed by a subphrase generator class. SMTK has a default subphrase generator that handles model, mesh, and attribute resources. However, graph-resource components are presented as a flat list – which is undesirable. The problem is that

We need some mechanism to specify how to use arcs to identify the children of a phrase’s subject component. There are several issues to consider. To illustrate them, examine the graph below. Let’s say we identify components A, B, and C as subjects for the top-level phrases. 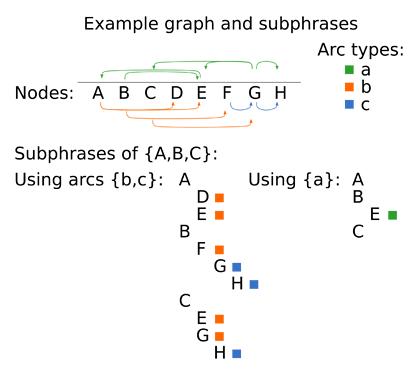 You can see that depending on which arc types we wish to use, the hierarchy may be different. Furthermore, if we used arc types a, b, and c there would be duplicates and cycles (not shown since it would recurse infnitely if expanded fully).

A simple design for a custom subphrase generator would be to template it on a traits object that described the arcs to use, Although it does not support all use cases (especially using different arcs at different depths of the tree), configuration would be minimal:

Your plugin would then be required to register a version specialized to your graph resource with the SubphraseGeneratorFactory in your Registrar:

Once registered, any qtResourceBrowser instance can override the default configuration (in smtk/extension/qt/ResourcePanelConfiguration.json) and name the custom subphrase generator by type (see smtk/common/TypeName.h for details on how the name is computed).

If you need a tree with nodes from multiple graph resources, then either

There are 2 specific use cases that have come up in terms of the work on a markup resource.

They point to the template parameters of the GraphSubphraseGenerator being classes in their own right rather than just a pair of node-type and arc-type. This is especially important for the inheritance hierarchy, since it must insert phrases that do not have a corresponding persistent object (i.e., the phrase whose title is a class type-name).

The advange of the “collection hierarchy” is that users can organize it to fit their data, workflow, and mental model. The disadvantage is that components may be added to the resource without grouping information, leaving them either not presented or requiring a “catch-all” grouping.

would be all that was required to make this subphrase generator.

The advantage to the “inheritance hierarchy” is that extracting the tree from the graph is simple… the placement of each component in the tree is determined by its classname and, within like items, by its user-assigned name.

The main disadvantage is that the layout is not always how users think of their data, nor does it illustrate relationships that are necessarily the most important.

A PhraseModel implementation would create a fixed set of phrases corresponding to types present in the resource whose immediate superclass was markup::Component. The subphrase generator would compute children of a parent as

NodeSubclassesAndInstances would, in its constructor, iterate over all of the graph-resource’s Traits::NodeTypes entries and introspect each type’s Superclass, creating a tree of class names. Then, when invoked to generate subphrases of a particular phrase, it would