This is a discussion of a new way of creating/editing Attribute Information.

Currently, the designer creates an UI based on a set of Views. These Views are then displayed starting with the “Top Level View” within the “Attribute Panel” within a ModelBuilder application as shown here: 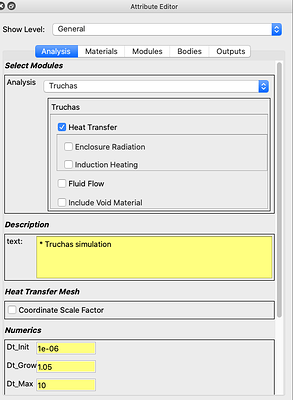 In the above example, the designer has chosen to use a Group View (with a Tabbed Style) as the top level View. The user then navigates through the attribute information using the provided tabs (and if there are children tabbed Group Views, using those tabs as well.

Instead of using tabs, we could instead use a tree style for navigation and then our more “traditional” Views for modification. 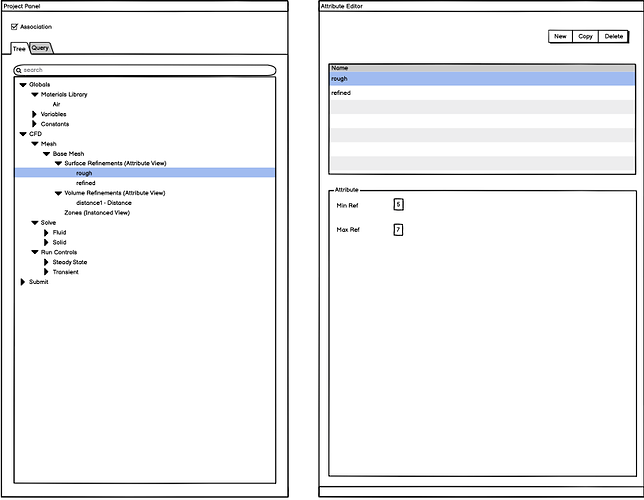 In this case, the Navigation Panel uses a tree to allow users to navigate through their data. Once they found something they wish to examine/change, they select it and it would bring up in the traditional Attribute Editing panel the appropriate View with desired attribute selected. In this example, a Surface Refinement Attribute named Rough has been selected and an Attribute View has been displayed in the editor panel.

One possible approach would be add a new type of Tree View.

If a child View was another Tree View it would introduce another level in the tree. If a non-Tree child View provided a query string, then it could be used to extract the appropriate attributes and display them underneath the tree node that corresponds to the View. If the user clicked on a non-Tree View node, the corresponding View would be displayed in the attribute editing panel. If an attribute was selected, then the View would also be told which Attribute was being edited.

We could create a new specification for the tree itself.

Note that the Views that take in Definitions would be modified to also take in Attribute Queries that can be defined in the Node.

If in addition to defining which View should be displayed in the Attribute Editor Panel, the tree also controlled other parts of the application framework such as:

For example the complete system could look like this: 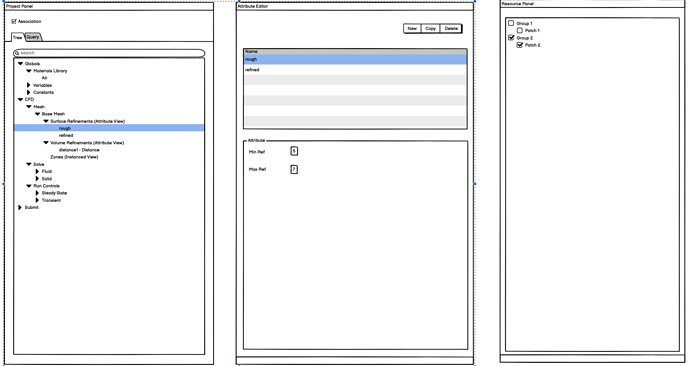 Here the Tree is also Resource Panel what information should be displayed in order to see and modify Rough’s association information.

Then the functionality becomes very close to the designed Task System. So in theory the Tree could represent the set of available Tasks and have appropriate badges to indicate the state of the Task.

Much of the above functionality is already in the Task Design and Core Implementation.

Just for clarification, is the main goal of the proposed view to provide an easier way to “find stuff” in the attribute editor? (I presume so)

My first impression is that, regardless of the implementation approach, this new view should be a separate dock widget from the current attribute editor, so that they can be used side-by-side.

At the 10000 ’ view, yes it is a navigator for editing the attribute information that would replace the use of Tabbed Group Views for structuring the information. However, as the discussions have evolved, the entries in the Navigation Tree are beginning to look like more general tasks.

There are 2 reasons for the “specification” in the new Panel:

In addition, in order for the Navigation panel to do what you are suggesting and just be given the current top-level view and “walk” the View structure would mean that the Navigation Panel would have to know the details of the Views themselves (including custom Views) or we would need to develop additional abstractions for the View classes.