Visual representation of subsets, side sets, and node sets

We are considering potential changes to smtk::geometry::Resource and SMTK’s VTK+PV extensions to express node sets, side sets, and element sets as indicator functions (for more compact storage than aeva’s approach).

Currently, several sessions that deal with discretized geometric models (i.e., meshes as models) create a separate VTK dataset for each component, even when that component is a subset of primitives from a primary (or referenced) component. This works well for small models, but as model sizes increase it becomes infeasible.

We also wish to handle the use case where users make selections or other references to parametric geometric models (i.e., CAD B-Rep spline models). The crux of the problem is how to efficiently expose geometry that in some cases is primary and in other cases is a reference to some primary geometry.

There are two primary tasks that any changes must accomplish:

that map members g of some set G (point-sets such as primitive shapes in our case) to boolean values. If a primitive is mapped to true/1, it is selected by the indicator for rendering; if false/0, it is omitted from rendering.

Note that indicator functions as defined above may have different notions of their domain, but the range is always \left\{0, 1\right\} . Our proposed design would mirror this by allowing C++ classes freedom in choosing how the primary component is referenced by a particular IndicatorFunction class. Unlike the formal definition of an indicator function above, we will add a degree of freedom to indicators by making them a composition of maps. For some component A, its indicator is

Specifying indicator functions for components as a discriminator composed with a classifer allows a classifier c to be shared by many components in a way that enforces constraints on the set of primary components.

What follows is a discussion of how the concepts above might apply to the two broad categories of geometric models that SMTK supports. Although the discussion below assumes VTK data is used for components, that is not a requirement of the design – it just simplifies the discussion.

For element sets (subsets), a classifier used to define indicator functions for can be stored as an integer-valued cell-data array and the discriminator for a component is simply a set of integers for which d_A = 1 (all other integers have d_A = 0), as shown on the left in the figure below:

For side sets, this is more complicated since a single primitive typically has multiple sides and each can be referenced individually by different components. We propose two schemes for indicator functions of side sets:

A complication of side sets is that they are generally not unique specifications; where a side is shared by multiple cells, it can be referenced with multiple, different (cell ID, side ID) tuples. For example, in the figure above, (cell 1, side 1) and (cell 3, side 0) refer to the same edge (the one shared by cell 1 and 3). If users create side sets by drawing on a geometric model, they may create side sets that need changes in order to meet constraints imposed by indicator functions. Continuing the example above, if component A and B in the second column of the figure represent regions with different materials, boundary conditions on components C and D in the third column may be required to be sides of a particular material (i.e., the BC may need to apply to (cell 1, side 1) rather than (cell 3, side 0) even though the user created the side set by drawing on cell 3).

Finally, for node sets, we can use the same scheme as element sets above, but with the class array centered on points instead of cells.

For CAD models or other sessions with parametric spline geometry, indicator functions can be expressed as geometric cell-primitives whose domain is the parameter-space of the primary component’s associated geometric data. In CAD parlance, the indicator function is a trimming curve (or surface or volume), as shown below: 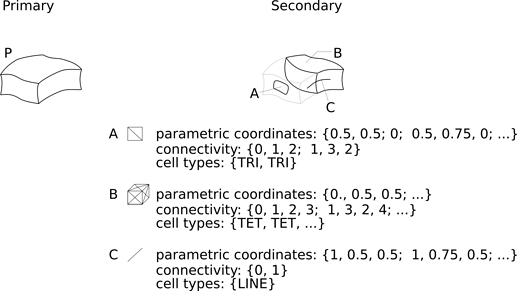 Unlike discrete geometry, the difference between element sets, side sets, and node sets is simply the dimension of the cells expressing the trimmed geometry.

This gets complicated if (for example) a side set trims multiple face cells that each have a different parameterization. In general, the indicator function would be stored as cells grouped by the primary-component whose parameter-space they exist inside.

As with the discrete case, it may sometimes be useful to consider indicator functions defined as a discriminator composed with a classifier. In this case,

This section covers how SMTK would implement the design above.