I am looking at extending the SMTK Project Manager capabilities to support multiple interdependent simulations. I foresee this requiring development in three main areas:

This post discusses item 1, a user interface for project configuration. Depending on the response/feedback, I hope to follow these with posts discussing the other items.

The proposed revisions will implement a limited subset of the planned workflow modeling capabilities from the SMTK roadmap. The plan is to use separate attribute resources to specify multiple simulations within a project. This will be more general and flexible than modeling multiple simulations in a single attribute resource, and is expected to be easier to implement as well.

With the proposed changes, each time a simulation job is submitted, job status and other metadata are saved in the project, including the filesystem location of the results on the remote system. This will allow the project manager to combine simulations specified by their attribute resource in the project.

For the first implementation, the plan is to integrate the new functionality as an advanced feature accessed from the project menu, and leave the current project functionality as-is.

For the new project configuration view, the basic user requirement is to specify one or more analyses, each modeled by an attribute resource and one or more geometric models. For the baseline use case, analyses are carried out by long-duration computing processes typically on HPC or other remote computing systems.

A mockup of the proposed UI panel shows two parts for configuring analyses and models, respectively. 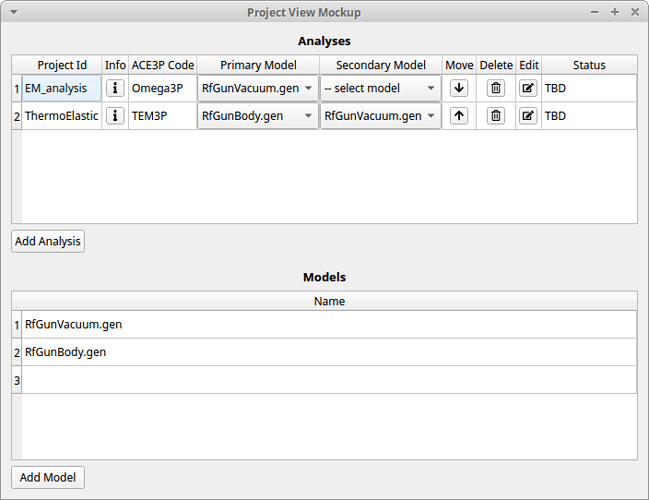 The upper part of the view is a table for analysis specifications, with each row representing one attribute resource.

As for the list of models, we might add a description field for some user-defined notes. Not shown in the mockup is a column for removing models from the project.

We have been using the project plugin at SLAC and LANL for over a year to model simulation problems computed by ACE3P and Truchas. In terms of user interface, the current plugin only presents a menu and a couple pop-up dialogs for configuring new projects and export. Each project contains a single attribute resource and up to two model resources. That is sufficient for many use cases, but at SLAC, there are a number of analyses where two simulations are loosely coupled, typically with an electromagnetic simulation supplying input data to an elastic/thermal simulation. There is an analogous use case with Truchas, which is used in conjunction with a view factor analysis code called Genre. To support these relatively simple, multiple-simulation projects, I want to begin implementing parts of the SMTK workflow modeling features that have been discussed in the past. This post begins documenting one approach toward that end.

@johnt I have a few suggestions for the mockup:

The primary and secondary model columns seem a little odd. Shouldn’t those be marked up elsewhere in the workflow (like when they are added)? Won’t it be possible (based on attribute associations, etc) which model fulfills which role on each attribute resource?

I was under the impression that the design of a “primary” and “secondary” model was temporary. What is the plan for its continued support?

Thanks, David. My reasoning behind the icons, and visible/explicit UI features in general, is based on a feeling that ACE3P users aren’t familiar with how these tables work. I might not be giving them enough credit, so I’ll reconsider.

Regarding your last note about assigning the model columns elsewhere (“like when they are assigned”):

The temporary part is that the current smtk::project::Project can only be used in practice to store (i) one attribute resource, (ii) one primary model, and (iii) one secondary model.

The plan is to remove this limitation so that applications can use Project to store any number of attribute and model resources, and users can construct any number of simulation models with those resources. My current thinking is that each simulation would still comprise one attribute resource and up to 2 model resources, because I don’t have use cases that need more than that, but we can consider generalizing this to N models (in for a penny…)

My thinking is still evolving on how projects should organize model resources, but I certainly agree that the “primary” and “secondary” designation is too simplistic. Following are some revisions to the original strawman.

1. Each resource in a project can be assigned a label (string) to indicate its use. For example:

2. The resource labeling can be done through the project UI, but (I presume) would/could be implemented internally with a resource property.

3. The smtk project classes wouldn’t impose any uniqueness requirement on labels, but solver-specific code would typically do so (can only be one “heat transfer” mesh, for example).

3. In the attribute templates, we can then use this project label to constrain each reference item to one specific model(s). However,

Presumably this could be done with an operation outside the project UI as well. The simulation plugin could provide a list of labels and their restrictions. Then, while it might also happen in the project UI, it could occur outside of projects if needed. That would eliminate your last concern.